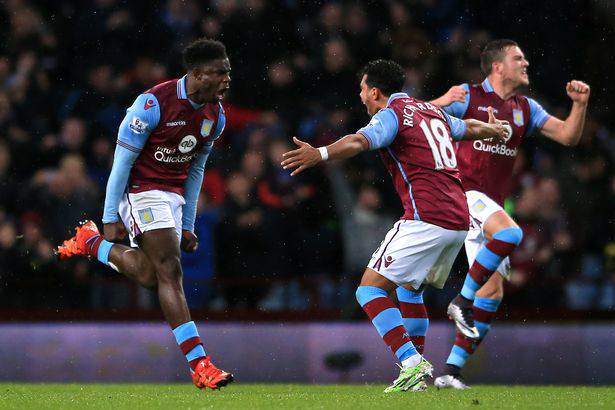 November hasn’t been a great month either, at least Villa did score their first point since the 2-2 draw against Sunderland way back in August. Nonetheless, I want to go over some of the best players this month and applaud their efforts in an otherwise dire month.

I had to choose our captain Richards as number 1 spot. Not only did Richards help Aston Villa get their first clean sheet since September but he also scored a terrific goal and his celebration highlights how much he wants this club to succeed. His recent interview that called out many Villa players as being, lazy and too nice was spot on as well. Richard also rose to second spot in the Whoscored rating, with a rating of 7.25. I think that Richards has become a good centre-back and will continue to get better. I reckon it would help Richards if he had a better centre-back partner since I don’t believe that Clark has been great this season, neither has Lescott. Richards is the only defender that has been able to regularly keep his spot in the starting 11.

Jordan Ayew is starting to become one of my favourite players at the club. It has taken Ayew some time to adapt to the Premier League, and after being sidelined for much of August and September, Ayew is now Villa’s number 1 forward. While I do not think Ayew is a great lone striker, he has done well in his role and scored 2 goals this month. He is now our joint top scorer alongside Gestede who also has 3 goals. Ayew is Villa’s 3rd top scorer in all leagues. For those curious, Ayew has also climbed the Whoscored table, and now sits 10th with an average score of 6.71. That is a 5 place climb from his rating in October.

Perhaps a surprise inclusion since his last game against Watford was poor. But Sanchez did play better in his previous few games, particularly against Man. City where he was able to protect the back 4 very well. Garde even said in a recent interview, that Villa are considerably more solid with Sanchez in the side. Sanchez did play more football than any other midfielders this month, playing 315 minutes and making 4 appearances. Sanchez is now ranked 5th in the Whoscored averages (6.84) climbing one spot. Sanchez has the potential to be Villa’s best defensive midfielder, but I reckon his performances are still a little inconsistent. Sanchez needs to step up and be ‘la roca’ on more than just one or two occasions. Sanchez is now 29 and has played a bit of football for Villa, he needs to emerge as a leader in midfielder.

I decided to throw in Veretout in this list since I reckon he has improved and benefited from the arrival of Garde. Since Garde and the coaching staff have been working on set pieces more, Veretout is given a better chance to shine for the Villa squad. Veretout managed to get his first assist of the season in the 3-2 defeat against Watford. Veretout has remained 17th in the Whoscored rating charts (6.39 average) but I reckon there is more to Veretout than we’ve seen. He is definitely developing in the right direction and I think he can soon start firing, scoring goals and providing more assists. I’d like to see Veretout become a bit more accurate with his passing though, it seems as though he tends to produce quite a few of misplaced passes (84% passing success rate).