Race for Aston Villa Top Scorer is Heating Up 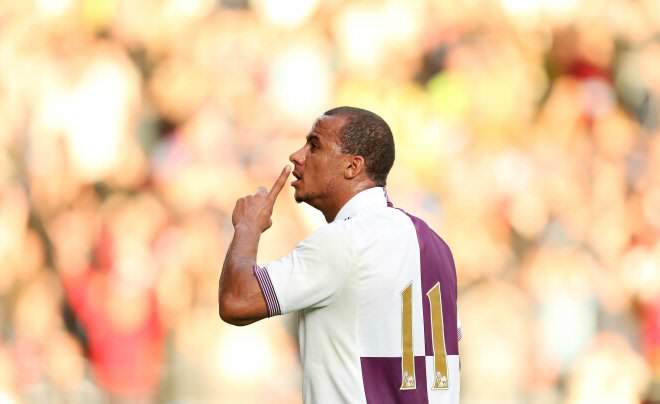 Goals, goals, goals, a re-occurring theme in our last 3 games. In all honesty, I don’t think many Villa fans expected Villa to score in 3 games under Paul Lambert let alone a total of 6 in a month! But it is happening under Sherwood and with the season closing to an end, the title of Aston Villa top scorer is very close. Let’s take a look at who has a realistic chance of snapping a title that has been held by Benteke since 2012-13 (23 and 11 goals respectfully).

1. Gabriel Agbonlahor – 6 Goals
Could Agbonlahor bag the title this year? The last time he held the title of top scorer at Aston Villa was in 2006-2007 with 10 goals. Could he reach that milestone this season? Under Sherwood it’s all very possible, Agbonlahor is finally playing as an attacker, not as a winger and it’s producing results. He took his two goals very well against Sunderland and his pace could still cause a few teams a few problems. I do think that Agbonlahor is the fittest and the most determined of the other forwards we have at Aston Villa. But that has more to do with the fact that Agbonlahor is Villa’s longest serving player and he loves playing for the club.

2. Christian Benteke – 5 Goals (1 FA Cup Goal) = 6
Surely if Benteke was fit from the beginning of the season he’d be leading this table? That’s what the majority of Aston Villa fans would probably believe. Once he returned, Benteke had a slow start to the season (due to injury troubles) but he’s firing now. I’d definitely say that Benteke has scored more vital goals than any other Villa player this season. His solo goal against Crystal Palace won us the game. Beating Blackpool in the dying minutes, and a ice cold penalty that saw Villa beat West Brom. That goal has been the catalyst of our recent good run. Could/has Sherwood reignited the fire that Benteke lost under Lambert (likewise with Adebayor from Spurs last season), I sure think so. Benteke is now getting more service with the likes of Sinclair and N’Zogbia out wide. Even if he doesn’t become Aston Villa’s top scorer this year, he could pip N’Zogbia as Villa’s most creative player, currently on 3 assists.

3. Andreas Weimann – 3 Goals (1 FA Cup Goal) = 4
A forgotten man under Tim Sherwood. Weimann has played less football in the past two months than both Benteke and Agbonlahor but that doesn’t mean he is completely out of the picture just yet. Weimann works very hard when on the pitch and can score goals. But I’m not sure if he can make the same impact as Benteke and Agbonlahor. Weimann doesn’t necessarily poses traits such as strength/pace that both Benteke and Agbonlahor hold. But I still think that Weimann could add to that tally before the end of the season. He should try to anyway, there is a growing number of Villa supporters who see Weimann more of a Championship player. I’m not quite in that pool just yet, but I think that Weimann surely has a point-or-two to prove in the closing portion of the season.

4. Scott Sinclair – 1 Goals (2 FA Cup Goal) = 3
I’m placing Sinclair as a long-shot for the title. Sinclair only arrived in January but he has impressed already. Scoring some great goals for Villa, including that terrific header against Stoke and a fantastic curling finish against West Brom that sent Villa to Wembly. He is currently our top FA Cup goal scorer, but something even more impressive is his goal to minute ratio: 1 goal every 150 minutes. Obviously this doesn’t sound great compared to other teams, but for Villa, it’s good. Benteke’s goal to minute ration is 1 goal every 313.5 minutes.

This isn’t going to be a great season for Villa goals, I’m 100% sure of that. Who you place the blame for that is up to you. But I personally think that Gabriel Agbonlahor will get the title of Aston Villa top scorer. He has fire in his belly, he is playing in his preferred position and I don’t think that Benteke will get that title 3 times in a row. Benteke is surely the favourite by majority of neutral fans. I’ve got a gut feeling that Agbonlahor will continue to score goals in the next few games and continue to impress the fans, and Tim Sherwood.