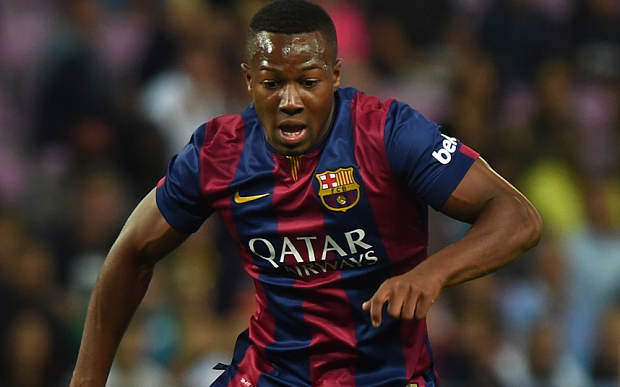 The Metro links Aston Villa with Lazio’s Keita Balde Diao. The 20 year old Spanish winger arose through the Barcelona youth academy before making the move to Lazio where he has made 48 appearances scoring 6 goals. It’s believed that Aston Villa have made a bid of £7.8 million for the forward (who can also play on the left). Keita has apparently put in a transfer request after falling out with Lazio boss Stefano Pioli. Liverpool and Arsenal have also been linked with Keita.

Keita would be a great signing because he has loads of potential. But I’d be very surprised if this move actually happened. Firstly, this is reported by the Metro which isn’t the most reliable source out there and secondly, I’m not sure if this would actually happen. Apparently Keita’s price has been slashed since handing in that transfer request and £8 million would prove to be good business.

Meanwhile Adama Traore has officially signed for Aston Villa, the deal is reportedly £7 million and Traore has signed a 5 year deal with the club.

“It’s an honour for me to come here. It’s a club that showed interest in me from the first moment and made me feel important in terms of their project.

“I have spoken to the manager and have a very good impression of him and what he wants from me. All this have made this club my top attraction. – Adama Traore

At the age of 19, Traore is a big talent who will be eager to impress the fans. Traore has great technical ability and isn’t afraid to get passed any players. Traore will also play a big part for Aston Villa for many years to come. The squad itself is quite young, and will need time to develop. But hopefully, with enough game time they will all be able to develop into great footballers.

“He’s dynamic, very quick and a maverick-type player – you never know what he’s going to do next and I mean that as a compliment,”

“He’s a huge asset for this club. He can hurt the opposition and I’m delighted to bring him here.”

“He comes from a very good academy with Barcelona and I’ve known him a long time,” said Sherwood.

“He makes his mind up when he gets the ball and those players are rare – there aren’t many players in the Premier League that can do that.

“We’re getting him at the midway part of his development, he’s not the finished article by a long way but he can certainly help us out in the short-term and in the future.” – Tim Sherwood

There will most likely be a buy-back clause inserted for Barcelona’s sake and the deal might also give Barcelona the right to have any say should a transfer bid arrival for Traore in the future. Hopefully this isn’t some kind of 3-year loan deal with a buy out clause of just £10 million.

Nonetheless Traore is a brilliant signing. We currently don’t have anyone that can play out wide on the right (well Bacuna can, but I don’t see it happening) and I’m sure that Sherwood can develop Traore into a great player for the short and long term.