Browse: Home » Why I’m Excited to Watch Helenius and Kozak

Why I’m Excited to Watch Helenius and Kozak 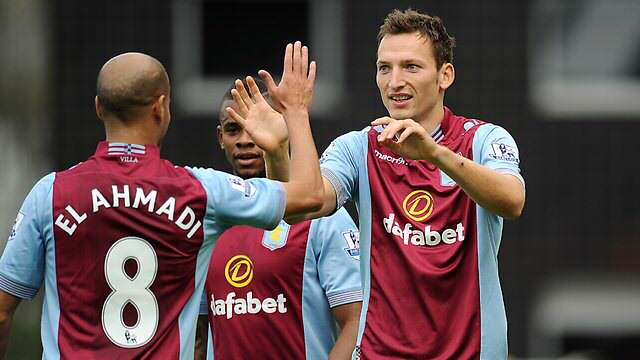 Aston Villa’s main striker, Christian Benteke is out with a hip injury, the extent of the injury will be evaluated today. But one thing is for sure, he will miss out on the League Cup game against Tottenham. So who will step up and the lead the attack line for Aston Villa? Helenius and Kozak, the two summer recruits from Aalboog and Lazio. These two players have a completely different playing style, but a very similar skin. Both are very tall, physical, strong players and both are good in the air. However, their playing styles are different. Helenius is very good on the ball, his technical ability is very good, yet we haven’t seen too much of that at Aston Villa. Kozak, is very good in the air, can cause chaos in the box.

Benteke will be hard to replace, he has already scored 5 goals in 6 games. Kozak and Helenius have scored 1 goal in 5 games between the pair, however both have only came off the bench. However, both have high scoring potential’s, Helenius has scored 40 goals in 102 games, last year he was the second top scorer in the Danish League, while Kozak was the Europa League top scorer.

I feel as though Aston Villa have become a little bit too predictable with Benteke, it’s often a long ball to Benteke, bring it down and find Agbonlahor or Weimann. Kozak and Helenius allows Aston Villa to play differently and a lot more unpredictably. I’m fairly confident that Villas-Boas and Pellegrini know very little about both Helenius and Kozak so it will be much more difficult to prepare. Also, it will be difficult to see how Lambert will set up his team. Will we see Albrighton and Tonev or Bacuna providing width this week? Or will Villa continue to play narrow and on the counter?

Benteke is a massive miss, but I feel it would be a good idea to switch it up a little bit in attack. Let’s try a different style of play and become a little less predictable. I for one am excited to see how our summer recruits will fare against Tottenham and I’m curious to learn wether or now Lambert has unearthed under attacking gem.