Browse: Home » Benteke Does Not Want to Sign New Contract 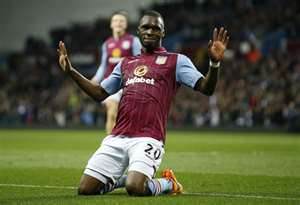 Skysports released a story last night that Christian Benteke does not want to sign a new Villa contract and instead is interested in leaving the club to play in the Champions League. The Benteke-saga is again upon us, saga’s in general are what Villa fans have pretty much gotten used to past the last few years. The last saga being Milner to City.

At the same time Aston Villa have stated that they have not received any bids for Benteke yet and he will not leave for less than his £32.5 million buy-out clause. Liverpool, Tottenham and Manchester United are all reported interested in the forward but none want to pay the transfer fee.

With little indication on who will and can bid on Benteke, I’m going to focus on what Villa are and can do. As things stand we have already sold Weimann, so it’s clear that we need to bring in a new striker regardless. Because if the season started, Agbonlahor and Kozak aren’t going to cut it. I think that Kozak could be a good short term replacement for Aston Villa, he will and can score goals. Might not be as good as Benteke, but it’s good to know that we still have a good striker among our ranks. It looks likely that Callum Robinson could take the role of Weimann but bringing in Charlie Austin would probably be enough. Ideally I’d like to see Villa bring in Austin or any replacement striker before selling Benteke. That way clubs can’t hold us hostage to a high transfer fee since they’ll know that we’d have more money to spend. Also, it’s unclear when Benteke will leave the club. Some fans believe it would be near deadline day as teams look for a last minute quality striker.

I personally think that the £32.5 million price is fair, you will hear Liverpool fans claiming that he isn’t worth more than £20 million. That just doesn’t make sense since Liverpool fans rate Sterling at £50 million, that is idiotic. With Benteke still very young, he will make an impact wherever he goes because his playing still is very adaptive and he is strong in the and with the ball in his feet. Whoever signs him won’t regret it.