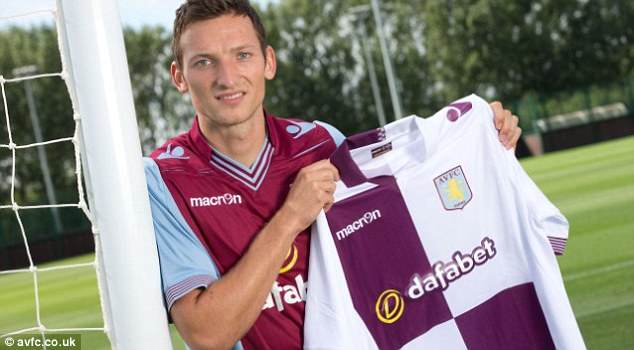 I’m starting a little earlier then expected. The transfer-window closes in a 24 hours I will be keeping you all up with all the latest transfer news regarding Aston Villa, and maybe some other interesting things.

20:46: Shay Given WILL NOT be joining Liverpool on loan

20:45: I’ve been out for a bit. But Kozak has joined Aston Villa on a 4-year contract. And Bannan has agreed a move to Crystal Palace

17:54: Ireland has joined Stoke City on a season-long! Rejoice!

16:48: It’s close to official. Barry Bannan is nearing a move to Blackpool. He is set to join for a fee of £1.75 million and sign a 3-year deal. So I guess I was wrong, Bannan will move to Blackpool on a permanent deal, not a season-long loan

15:18: Ireland has arrived at Stoke to finalise his loan move.

14:34: It now appears that Kozak will cost Aston Villa £7m. The deal also includes add-ons. That’s a lot of money for someone who hadn’t scored a League goal last season! Apparently he is very versatile and an out-and-out striker.

14:33: Bannan’s move to Crystal Palace appears to be a season-long loan. That means that Aston Villa will not be able to offload any players permanently.

14:31: Mark Hughes is close to sealing a season-long loan deal with out of favour midfielder Stephen Ireland

12:24: According to Mat Kendrick and Stan Collymore they believe that Kozak would most likely be our only acquisition. With Bannan to Crystal Palace the only departure. On Twitter some claim that Lazio have also suggested right-back, Pereirinha and centre-back Stankevicius.

10:08: Apparently a fee has been agreed with Lazio. It appears to be a 7.5 million euro fee with 1.5 million euro add-ons. This means that the deal will cost Aston Villa roughly 9 million euros. That’s a lot of money.

9:29: Not much going on regarding Aston Villa, the only reports I find relate to Bannan’s medical at Crystal Palace. Stoke have bought in Arnautovic which is an interesting signing. Liverpool have strengthened their defence with Sakho and Ilori.

06:54: Today is transfer deadline day. I’ll be keeping you all up to date with all the recent transfer rumours and news. Last season, Paul Lambert brought in Ashley Westwood and Christian Benteke on transfer deadline. Will there again be activity at Villa Park? Well, so far Aston Villa are linked with a move with Lazio forward Kozak and Bannan is linked with a move to Crystal Palace.

23:00: It’s midnight where I live, I’ll be back tomorrow morning to continue this thread. Discuss below and if you hear of any juicy rumours remember to Tweet at the Aston Villa News and Views twitter account. It’s easy for me to check out and post all the rumours. Good night.

22:37: Romour: According to an ITK lady, Kozak is just a ‘smokescreen’ signing. Paul Lambert and Faulkner have an even bigger name lined up. Don’t know any more than that, I’d imagine that would only happen if we sell Bannan and Given though

22:27: People claiming a deal has been struck for Kozak, I’m hearing fee’s of 4 million or €7.5m plus add-ons. Nothing is official until confirmed, but Kovak will very likely be an Aston Villa player tomorrow.

22:19: Barry Bannan is currently at a hotel in London. Palace are negotiating a fee with Aston Villa for midfielder Barry Bannan. He will most likely be off, I can see this being a low transfer fee.

22:18: Kozak is rumoured to be joining Aston Villa on a permanent deal! A loan deal was rumoured earlier but everyone on Twitter is claiming a permanent. Fee isn’t mentioned. Deal to be completed tomorrow.