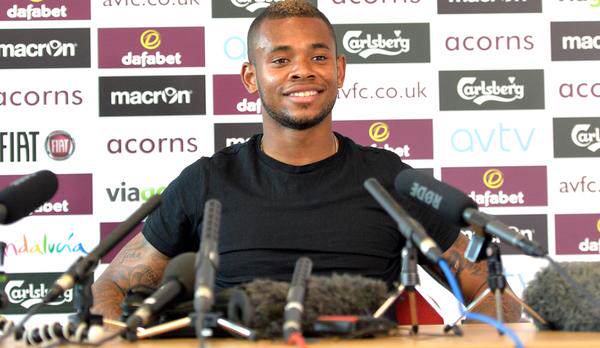 The right-back slot has been dominated by come-back players. Alan Hutton who has famously been exiled by Lambert did make a return this season, even securing a new three year deal! What a turn around by Hutton. He was labelled as a liability in his first season at Aston Villa under McLeish but he was solid for Villa this season. Good in defence and would often bomb down the wing and support the attack. Perhaps its age or more experience, but whatever Hutton has been doing has definitely worked. Hopefully he can continue his progress and form for next season.
Bacuna may not sound like a comeback story but under Sherwood he has consistently played at the right-back position. Granted that spot was secured when Hutton got injured against United, but he managed to keep his position at right back despite Hutton returning from injury. Bacuna managed to net the most assists out of any Aston Villa player at a total of 6! Not bad for a player that has played more of his football at right back. That just demonstrates his worth when he supports the attack.

Based on Whoscored ratings, Alan Hutton has a total rating of 6.83 (6th best) while Bacuna has a rating of 6.54 (17th best). The stand out stat’s include: Alan Hutton ranks 3rd for most fouled (average of 1.7), Hutton was tied for 1st for most successful crosses per game (on average 1) and Bacuna was just one position lower with an average of 0.9 successful crosses per game. And of course Bacuna had the most assists at 6.

Based on the information my final verdict is:

Granted, Bacuna has created the most assists but at the end of the day I made this decision by answer one simple question. If I was a manager who would I want playing as my right-back, the answer was Hutton. Not only has he come out of the shadows, which I respect him for doing so. But he has performed really well, he was part of the incredibly back line in the opening few weeks of the season and was instrumental when in the dire months under Lambert. He scored a very important goal against Leicester. He put in some great crosses, but most importantly he was solid in defence.

Might be a bit harsh to place Bacuna behind Hutton considering that Bacuna did have the most assists, but if Bacuna had played the majority of his games as a right midfielder, than he’d definitely top that category. But the truth of the matter is, I just don’t see Bacuna as an equally good defender to Hutton. Granted, Bacuna’s clean sheet to minutes played ratio is better (369 minutes per clean sheet as opposed to Hutton’s 396 minutes per clean sheet) I just don’t see Bacuna as a right-back. Maybe this will change, but I just think he enjoys being in more forward positions and I see him as a greater threat if played higher up the pitch. Full credit to getting back into the team and it looks likely that Bacuna will feature in the FA Cup final, completing a remarkable turn around that even saw Bacuna commenting that he would be looking to leave the club in summer under Lambert. That now looks unlikely.

This was a little bit more of a difficult decision to make, the attacking stats did favour Bacuna, but that is exactly why I went with Hutton. Granted it’s great that a right-back is attacking and I like that, but all the time is not a great policy especially with teams that can hurt us on the counter. Bacuna’s inexperience of playing at right-back has hurt us a few times. I don’t see Hutton as our right-back for the long-term but I definitely feel as though he is more than capable of keeping his right-back spot for another season because like I said, he has definitely made a comeback and I for one am pleased with his performance for the Claret and Blue this season.