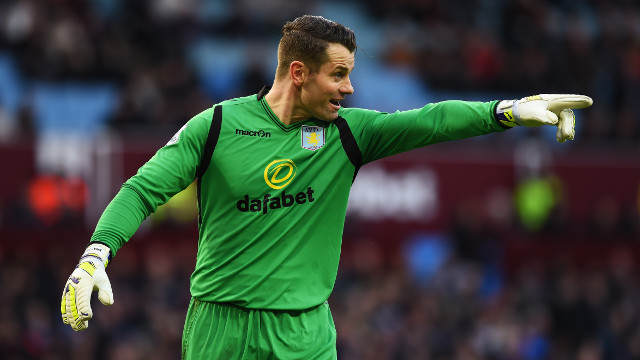 With the Premier League season finished, I will be taking a look at the best players in their respected positions and the outcome would be Aston Villa’s best starting 11 based on statistics, performance analysis and general contribution to the team. We will be starting off with the goalkeeper position. This season we have had 3 keepers playing for Aston Villa. Brad Guzan, Shay Given and Jed Steer, each keeper has made at least one appearance.

Whoscored statistics has given a rating of 6.64 to Guzan, 6.39 to Given and 6.15 to Steer. In total Given has made an average of 3 saves per game on par with Guzan while Steer had to make do with just 2. Guzan has excelled with saves that have come from outside the box, Given has done better with shots in the penalty area while Steer had an equal amount of saves from inside and outside the penalty box.

Based on that information here is my order for best goal keeper:

While you’re reading this you may just be wondering why I even bothered to write this if the answer was going to be quite obvious. Well we had to start somewhere and to be fair to Given he has a better clean sheet to appearance ratio! But what to looks to be the last season for Guzan, Guzan has done well in goal. He and his defence has claimed more clean sheets this season from last season. Guzan has also become the number 1 keeper for the United States team. One of Guzan’s best performances was against Crystal Palace in the 1-0 victory, Guzan made more than 5 saves and kept a clean sheet in what was a great defensive performance.

The revived man, since he has returned to the first team I don’t think that Given has played that bad at all. He definitely has a better clean sheet to appearance ratio. In average Given has managed 1 clean sheet for every 270 minutes, which in order words is 1 clean sheet every 3 games. Given has featured mostly in Aston Villa’s league cup and FA Cup but we can’t forget that he has been instrumental in getting Aston Villa into the FA Cup final including some amazing saves against West Brom and Leicester.

The young man came out of no where to make his first appearance for Aston Villa in the Premier League. For a 22 year old he certainly didn’t play that poorly. Steer has definitely improved after spending a year out playing on loan for Doncaster and Yeovil. He has the confidence and commands the box well. He is rated by Sherwood for two reasons, he stated his interest in keeping Steer in earlier interviews and started in goal against Burnley. Steer could definitely climb this list next season and perhaps establish himself as Guzan’s replacement.

This was a rather a simple analysis of our 3 keepers, it appears as though there will be a keeper shake up at the club, the first one in a few years as Given and Guzan had made the foundation of our keeper position since McLeish’s era. It will be interesting to see what approach Sherwood will take to replace Guzan and Given during the transfer season.