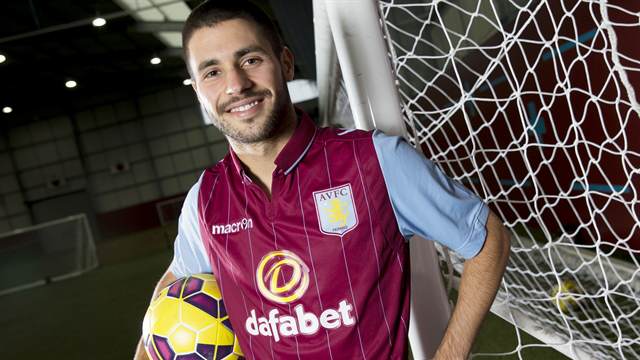 Carles Gil has finally signed for Aston Villa with agent fee’s finally being sorted after an initial issue early Tuesday morning. Gil arrives from Valencia for a fee of £3.4 million. The 22 year old midfielder can play either behind the striker or out wide on both wings. Paul Lambert describes Gil as the creative spark that Villa have lacked throughout the season.

Gils has made 9 appearances for Valencia this season scoring 1 goal. Last season he played with Carlos Sanchez at Elche. Gil is described as a very tactical play with very impressive dribbling skills, however it’s noted that Gil’s shooting ability still needs some work.

“We’ve been on the lookout for a creative player and he will certainly bring that extra element to the side,”

“He’s only 22 years of age but he will come here and give us something I don’t think we have at the moment. He can play either role, coming in off the sides or playing in behind as well.

“He can create chances and get those chances put away. He has a lot to offer and I know we can get the best out of him.” – Paul Lambert

With Paul Lambert finally signing a creative attacking midfield I sure hope that it will result in a few more goals for Aston Villa this season. The addition of another winger would make the squad just that much stronger for the second portion of the season.

“Once I knew that this club was interested in me I wanted to join.

“I am really looking forward to playing here and showing the fans what I can do.

“I can play on either side or in the middle of midfield and I like playing as part of the team, making things happen for my teammates.

“This is a very historic club in England, a very important club in the Premier League, and I am looking forward to playing for such a great club in a league that is the top league in the world.” – Carles Gil