Browse: Home » Villa will Bounce Back

Villa will Bounce Back 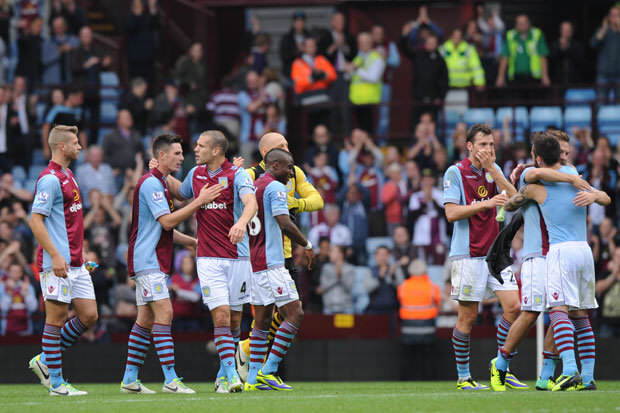 Aston Villa lost to Tottenham yesterday and fan’s haven’t been to happy about it. Villa rarely threatened, failed to create much and struggle to cope with Spurs limited attacks. Still, many fans are forgetting that Aston Villa and Spurs aren’t competing for the same League positions. This isn’t 2007-2009 when both teams where chasing Champions League football, it’s 2013. Aston Villa are a team in transition, whilst Spurs are a team which just spent over 100 million pounds on quality players in an effort to push for Champions League. See a difference?

Tottenham are known to have a solid defence, only Southampton have kept more clean sheets then Spurs. Villas-boas knows how to make it difficult for opponents to score. Aston Villa have tended to play counter-attacking football, yesterday, Spurs broke off many counter-attacks through fouls, throw-owns and freekicks. It certainly worked. Spurs were also able to create more opportunities, they have a very creative midfield. Which is why Villas-boas tends to play a 5 man midfield. Aston Villa doesn’t have the same level of creativity. Yet, Villa have scored 1 goal more than Spurs this season.

But the greatest difference between the two sides is the astonishing squad depth that Spurs possess. Villas-boas changed the starting 11 quite a bit, but it still featured the likes of Townsend, Paulinho, Soldado and Sandro. On top of that, they could call on Lamela, Defoe, Eriksen, some of the worlds best players. Villa just don’t have that, and we must accept it. As Villa’s youth progresses and developed, Villa, may too have such a quality bench in the future. Going into this game, the best I was preparing for was a draw.

But we must look forward. We’ve got 6 games coming up against teams that will be fighting for similar League positions, these are games that we should looking to win. Lambert will make necessary changes in order to make us a little bit more competitive against similarly ranked opposition. From November I expect to see Villa climbing up the table, and possibly, even begin to cement a spot in the top 10.